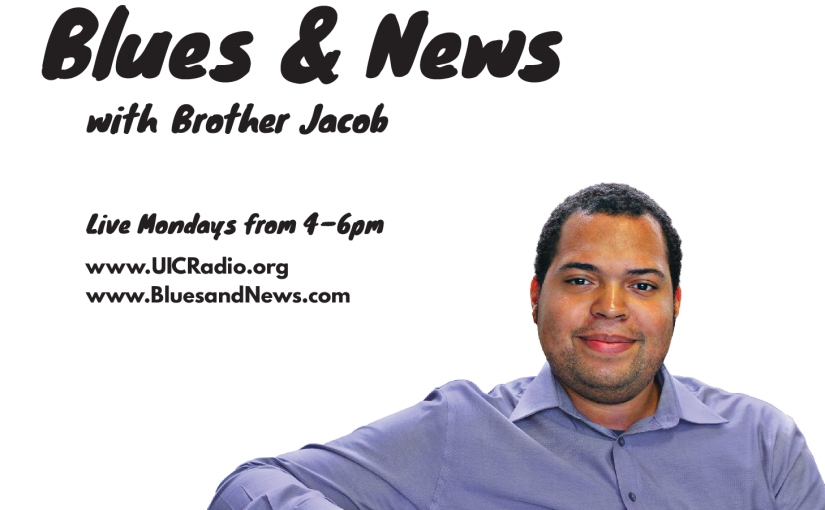 Blues & News with Brother Jacob serving the genre well in 2016

By Phil Whipple – Staff writer at the Sun Journal, a daily newspaper based in Lewiston, Maine.

CHICAGO, IL. — It’s no secret that Chicago is home to some of the finest artists in blues music today. It’s also widely known that the Windy City has more blues enthusiasts than any other major city in the country, and understandably so.

As of early November, there’s been a new blues radio show serving this great genre of music and its fans. Blues & News with Brother Jacob, heard every Monday from 4 to 6 p.m. (Central Time) on UIC Radio (University of Illinois at Chicago) is rapidly gaining popularity among blues fans all over the world, thanks to its dynamic host and the online Live streaming at www.uicradio.org.

Show host Jacob Schulz is a young blues vocalist and songwriter with a deep passion for the music. Schulz also has an appreciation for where the blues came from; its roots and those who carried the genre from its inception through the decades. That passion, combined with his connections to major artists across the blues spectrum, produces a two-hour show that bursts with energy from start to finish.

“I am just enjoying hosting this show more than words can describe,” Schulz said as he reflected on the early success of his first four shows. “To get interviews with top-notch artists like the great Bobby Rush, Miss Deitra Farr and Denise LaSalle added credibility to the show right away. The response I’ve received from the blues artists and community, in general, has been overwhelming.”

Schulz released his debut recording in 2013 entitled “Blues From Below.” The CD features 10 tracks and includes guest appearances by Farr, Katherine Davis, Matthew Skoller and Alligator Records recording artist Toronzo Cannon. Schulz’s voice is silky-smooth, and the band is tight on every track.

Blues & News with Brother Jacob isn’t just about playing music and interviewing artists. The “news” portion of the show keeps blues fans up-to-date on what’s happening in and around the blues scene in Chicago and surrounding areas. If an artist has news to share, Brother Jacob is the man to call.

“We’ve already heard from artists around the country who call in to offer support for the show and bring listeners up to speed on their travels. The blues is one big extended family, which is part of its appeal. I just love talking with both artists and fans as we all share the passion for this great music.”

Schulz maintains a Website for his new show, which can be found at https://bluesandnews.com. All shows are archived on the site so fans who can’t listen live can access them at any time. It’s a service that Schulz is happy to provide, since his love for blues and those who perform Live is undeniable.

“I’m thrilled to make this contribution to the music we all know and love,” Schulz added. “There are so many great artists out there who deserve a little recognition for their efforts. If I can offer that while keeping fans up to date on their activities and shows, I’ll be a very happy man. I’ll continue to line up great guests, and I hope blues fans will call in when they can to share their love for the music.”

UIC Radio is the official radio station of the University of Illinois at Chicago. UIC Radio’s mission is to provide entertainment, information, and an education for the UIC and Chicago-land communities through diverse programming that reflects and respects the interest of UIC students, as well as the rich diversity and multicultural backgrounds of the students, faculty, and staff of UIC. The content features an eclectic range of music genres, talk radio, news, and public affairs programming.